Staying Positive Through My Experience with CVST: Maddie’s Story 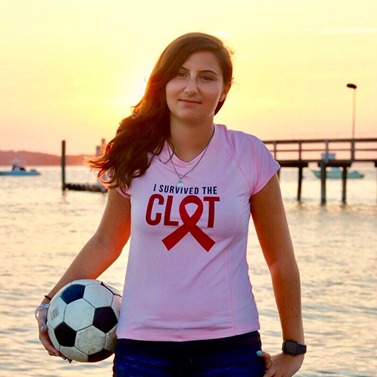 Staying Positive Through My Experience with CVST: Maddie’s Story

I first learned about blood clots when I was 19 years old, after reading the warning label on one of my prescriptions. I had just started taking estrogen-based birth control, and I remember my first thought was, “That can’t happen to me, because no one actually gets those side effects.” Looking back, I wish I had paid more attention and realized those numbers were more than just statistics.

On October 25, 2016, I developed a shooting pain through my head, so I went to the ER. The doctors insisted that my pain must not be that bad. I knew it was very real, and I asked for a scan of my head to be safe. Instead of a scan, I was told it was nothing and to return to campus. I came back to the ER later in the week due to worsening pain, dizziness, vomiting, sensitivity to light, and confusion. The ER diagnosed me with a migraine, and once again, sent me home. I think they thought I was just a naive college student.

It wasn’t until about a week later, when the pain reached its peak, that I returned to the ER and finally received a scan. I was diagnosed with Cerebral Venous Sinus Thrombosis, or CVST, which is a blood clot in the brain. It was blocking five major veins around my brain. I was rushed to another hospital and was treated in the neurosurgical center where I was closely monitored. I received a heparin drip, and then took low molecular weight heparin injections, before bridging to the oral anticoagulant warfarin. Doctors were amazed that I didn’t have a major stroke.

I was on blood thinners for five months, which was extremely tough. I went from being a strong and healthy college athlete to a fragile patient who had to wear a medical alert bracelet. I also had to get my blood tested every three days to monitor my INR.  A few months after my clot dissolved, I developed another very rare complication called AV Dural Fistulas, or dangerous lesions around my brain that contained abnormal blood flow. The formation of these vessels is thought to be caused by the severe clotting of my veins. My clot was caused by a combination of estrogen-based birth control and dehydration. Not being correctly diagnosed at the first sign of symptoms, and continuing a lifestyle that increased these blood clotting risks, caused my clot to grow with these further complications.

I tell my story nearly two years and two brain surgeries later to remind patients to advocate for themselves when visiting the ER, especially one that is close to a university. I continue to deal with the effects and complications from delays in treatment, including diagnostic procedures, surgeries, and aspirin therapy, all which may have never occurred if the doctors considered the possibility of a blood clot.  Although rare, blood clots in the brain can occur, and they can be very dangerous.

The National Blood Clot Alliance has done an amazing job of being a support system for those diagnosed with clots and raising awareness for PE and DVT, and I hope my story can help shed some light on CVST as well.

In general, practicing good habits such as staying well hydrated, and knowing your risk for blood clots if you are taking any type of estrogen-based hormone therapy, is important. Be sure to ask your OB/GYN about the risks for clotting before starting hormonal birth control. It is important to get treatment for any type of clot, especially clots in and around the brain, because the compilations can be life-threatening and long-lasting.

Staying positive can be tricky in a case like mine. As a young person diagnosed with something stereotypically associated with older adults, it was extremely difficult to be comfortable in my own body while trying to go about life as a college student. If you’re going through a similar situation, it is important to embrace this chapter in your life. It might be a little more difficult, but that doesn’t mean that clearer skies won’t be on the horizon. Advocate for yourself, acknowledge that you are going through a bit of a rough patch, and stay positive.

Do you have a comment or thought? Join our online discussion community and connect with other people who have experienced a blood clot.