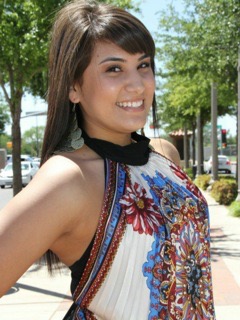 My name is Arianna, and I was only 21 when I got the worst unexpected news of my life. A couple days before I got the terrifying news, I had noticed I had what I described as an “air pocket” in the upper left side of my back that was uncomfortable and wouldn’t go away. It eventually went away and I never really thought too much about it until September 23, 2014 – a day I will never forget.

I woke up that morning and was doing my usual routine to get ready for work. I noticed just straightening my hair I was getting out of breath, but again I didn’t think too much about it. I was a housekeeper at the time and noticed after I started cleaning that day that just sweeping back and forth I was out of breath, which was unusual. I felt like I couldn’t catch my breath no matter how hard I tried. My chest hurt to take a deep breath in, my mid/lower back hurt, and I had a small cough. I used to donate plasma, and I would feel weak afterwards from time to time. So, after work, I went to donate and then I went to Walmart and while there, I noticed my right arm went completely numb. I got very hot, and I felt like I was going to pass out at any second. I put everything down and hurried to my car.

Once in my car, I put my AC on full blast. I thought I was feeling like that because I had just donated, so I went home and laid down and I still felt horrible. I had my mom come and pick me up to take me to the ER. After seven hours of waiting, I finally got called back and, at first, doctors couldn’t find anything wrong and they decided to do one more test, which was a CT scan. As we waited for the doctor to come tell us the results, the nurse came in and told me to change into a gown and I didn’t understand why I had to do that until a couple of doctors came in with a very funny looks on their faces. They broke the bad news to me and my mom, explaining that they had found multiple blood clots in each of my lungs. They called it saddle Pulmonary Embolisms (PE’s).

They had asked if I was on birth control pills, and I told them yes. I had to stop taking them immediately, because they suspected that was the cause for my PE’s, but weren’t sure. I was immediately given a blood thinner shot in my stomach. They explained to me I would be put on blood thinner injections, and they told me I would be admitted to the Medical Intensive Care Unit (MICU), where I stayed for four days before I was moved to a regular room.

To top that off, I was put in the same exact room in the MICU that my Papa was in when he was fighting for his life a couple of months before. Talk about scary! I stayed in the hospital for a week, and after I was released I was put on blood thinner pills and I had to get my INR levels checked weekly.

While in the hospital, the doctors said It was important that I not get pregnant, because I was going to have a D-Dimer test done to see if I was still clotting and a genetic test done to see if it ran in my family. Two months later, I ended up pregnant and very upset because of what the doctors had told me, only to find out the baby would be okay and was I placed on the same injections I was on in the hospital. I had to inject myself twice throughout my whole pregnancy.

Today, I have a healthy three-month old baby boy. On October 19, 2015, I finally had the D-Dimer test and genetic test done and for now, I’m not on any blood thinners. The results take a week to get back, so I’m hoping for good news and to hear I will not have to take blood thinners for good. The only thing about not taking blood thinners is, I’m going to constantly worry if I’m going to get another clot. Any little ache or pain I feel I’m always wondering.

I’m sharing my story today because I want to make other ladies aware of the contraceptives that they take. I’m lucky to have such a great supportive family who stuck by my side and are still right next to me. I’ve learned to never take your life for granted.