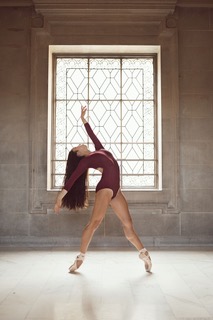 My name is Tiffany, and I am a career ballerina dealing with the high risk of bilateral pulmonary emboli, or blood clots in my lungs. My professional dance career was side tracked as I sought treatment. It was March 15, 2017, and my senior year, when I was performing a ballet solo in George Balanchine’s Valse Fantasie. I began wheezing and felt a stabbing pain throughout my back and chest. My head began to throb, my heart rate increased rapidly, my vision became blurry, and my limbs went numb. I was always fine up until one point of the dance and each time at practice, I would attempt to push myself until the pain was too much.

I knew something was wrong, and I told my dad to go on a run with me down my street to assess my condition. He questionably came outside with me and as we began running the pain began. We went to an allergist and to an ear, nose, and throat doctor, but I still felt like something was internally wrong. I was diagnosed with exercise induced asthma, but as a dancer, I knew my body, and I knew something was wrong. I demanded to see other doctors, and I was sent to a pulmonologist in Northern California. After a blood test and CAT scan, they found massive blood clots in both of my lungs, and concluded that a hormone-based birth control pill was the cause. I was forced to give up dancing for a while, lost my opportunity to become a trainee at BalletMet in Ohio, and was treated with a new oral anticoagulant for six months.

I am currently attending the University of California Irvine and am a Dance Major. One night I awoke to what felt like a heart attack. I was rushed to the ER, and I later found that I had developed clots in my lungs yet again. This second time was due to an ankle surgery I received on May 21, 2018. Even though I took the precautionary steps of taking low molecular weight heparin injections, daily aspirin, and wearing compression socks after the surgery. I also stopped to take breaks on flights and long car drives, but doctors still found blood clots. I was hospitalized, and I am currently in the middle of another course of treatment. Doctors did ultrasounds on my legs and pelvis and did not find the source of clotting. I am now following up with a cardiologist and hematologist.

I hope to shed light on blood clots, not only because they have impacted my life greatly, but because they have helped me become more aware of how dangerous they are. It is unusual to be this young and be diagnosed with pulmonary embolism twice. I advise all people to really understand your body, and when you feel something is wrong, keep fighting because it could be your life on the line.