This Has Changed Me Forever – Scarlett Bates’ Story

This Has Changed Me Forever – Scarlett Bates’ Story 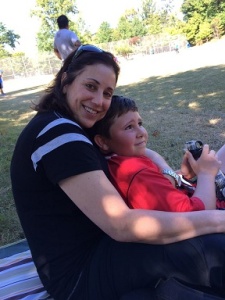 I was putting in many hours on what I thought was an important project at work, and I was feeling run-down. I had developed a cough that I couldn’t seem to shake. My leg began to hurt, but I didn’t recall injuring myself. I had a nagging memory that my father’s leg had swelled just before he died, but I brushed it off. After a week of ignoring my symptoms, I finally went to the doctor. By this time, my breathing was labored, and I shared the newest symptom of the pain in my leg. I was told to go to the emergency room because the clinic was not equipped to perform a CT scan. At first, I didn’t take the doctor seriously, until she asked me to sign a waiver stating that I had been told to go to the ER. I believed it was a waste of time, I thought that I simply had bronchitis, but I went nonetheless.

I was amazed at how quickly my whole world changed. The doctor came in to the room where I sat waiting, wearing an ugly hospital gown and texting with my office. Everything was happening so fast, yet I felt like the doctor was speaking very slowly. I don’t remember all of the words he said, but I do recall the words “pulmonary emboli” and “deep vein thrombosis.” I didn’t know what a DVT was exactly.  However, I knew all too well what PE meant:  My father had lost his life to a PE many years ago.  Blood clots that had developed in my left leg were breaking off and traveling to my lungs. I was admitted to the hospital to be stabilized in the intensive care unit. I was terrified and my mind was spinning. There were so many doctors and so many tests. I remained hospitalized for five days.

I had nightmares after I was released. There is not a lot of information available about recovery and what to expect. It took a few months for the weight of everything that had happened to sink in and for me to cope with it all. I was emotional and often depressed. I learned that I have a genetic disorder called Factor-V Leiden, as well as two other gene mutations called Lupus Anticoagulant and MTHFR (methylenetetrahydrofolate reductase). There were signs long before this happened, but I didn’t know what they were. I had a miscarriage in my twenties, which can occur in women with clotting issues.

It’s been more than a year since I experienced my PE, and I’m happy, well, and alive. Most of all, I am thankful. My leg still gets swollen when I am standing for too long or I walk a lot. I still have breathing problems at times, mostly when I am exercising.  I am hyper-aware of every change in my body, and I often worry that I’ll get another clot. I will take blood thinners for the rest of my life, but that’s okay.  It’s just a pill. My life is very different now and this has changed me forever. I don’t work as much as I used to, and I spend more time living my life, trying to be a better friend, sibling and niece. I am enjoying my life and forcing myself to get out and participate in the world and not hide in my job. I want to learn more about the health issues that now affect me, and I also want to get involved. I want to help others, and I want to help get the word out.

I am sharing my story because I want people who believe it can’t happen to them to know that it can. I want people who believe work cannot wait, that it can. I want people to know that DVT or PE is not caused by things like drinking, drugs, sexual promiscuity, or poor eating habits. I am amazed at the misconceptions people have. I want that person who is ignoring their symptoms to stop. Go get it checked. No one will judge you if you are wrong. This is serious and can be deadly.