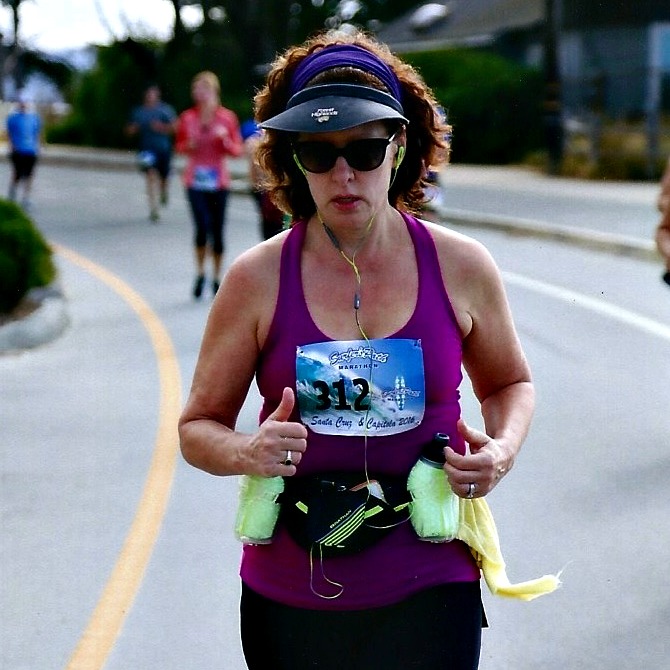 I am 53 years old, a busy business owner, wife, and mother. Being diagnosed with PE has rocked my world.

I ran a marathon in May 2016. A month later, during my annual exam, my gynecologist suggested I take target=”_blank”birth control to “get through menopause without having to deal with the nuisances.” A voice inside me said “no” because I had not been on the pill for 15 years, but I agreed.

Several weeks later, I awoke with a painful Charlie horse behind my right knee. I was doing Pilates and thought I had pulled it. When it didn’t improve, I went to my orthopedist. He noticed it was swollen, but told me to enjoy the vacation we were taking and to see him when I returned if it wasn’t better. In the back of my mind, I thought it might be a blood clot, because my father had just been through his second bout with PEs, but I also thought I was being paranoid.

Eventually, the pain subsided, but several weeks later, I was presenting in front of a large group and started feeling breathless. It shocked me as I often speak in public. I tossed it off as anxiety. For the next month, I would often feel I could not catch a deep breath. I started meditating, but the breathlessness lingered. I went on a few runs but could not go a mile without stopping and was then fatigued for the rest of the day. I decided to see my doctor.

Our insurance had changed so she was a new doctor, and she saved my life. She took my symptoms seriously, ordering a blood panel of tests, including D-Dimer, saying she suspected a small blood clot. It was amazing because I had not mentioned my dad’s PEs, and I never thought I had anything similar, given how healthy I thought I was. They drew blood that day.

I flew to Houston the next morning. A voicemail from my doctor was waiting for me when I landed, telling me my blood work showed elevated D-Dimer. She told me to go to the ER right away for a CT scan. I was in a strange city, not my home!

I drove myself to an ER clinic. A lung x-ray was “unremarkable,” but my CT scan showed PEs in both lungs. My life changed in that moment. An ambulance took me to the hospital, where I stayed two nights. It was all surreal, with concerned texts and calls from my husband and family back home.

In the hospital, I was given anticoagulant injections every 12 hours. I had an echocardiogram that was normal. Ultrasounds on my legs showed no current DVTs. I was released with a prescription for a new oral anticoagulant. The hardest part has been the recovery. It’s been six weeks since diagnosis, and I feel like it’s three steps forward, three steps back. I am emotionally fragile. I am hypersensitive to any leg pain. When I fly, I am fidgeting. I worry that because I am still breathless sometimes, I am not improving.  I go weeks feeling almost normal, and then I am hit by fatigue and breathlessness.

I am not sure I will ever know how I got PEs. My best guess is a genetic predisposition (given my dad) and the birth control pills. My genetic blood tests came back normal, with a slightly low protein S level that will be re-checked.

Reading others’ stories is comforting as I wade through recovery. I am grateful to be alive.

To learn more about the treatment of menopause symptoms and blood clot risks, please click here.