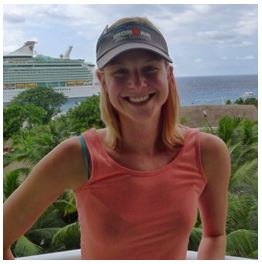 My name is Jessica and I’m so excited to share my experience with Team Stop the Clot.

Less than a year ago I was sitting in a hospital bed thinking my life as an athlete was over. My pity party came to an end when I found this blog. Reading all of the Clot Buster stories gave me hope and inspiration. I hope you find some in my story too.

In January 2013 I had the adventure of a lifetime – summiting Mt. Kilimanjaro. It is the tallest free-standing mountain in the world with an elevation of 19,341 feet.

During the final descent off the mountain (day 8) I developed a sharp pain in my calf. I assumed it was a pulled muscle from summiting. It seemed obvious to me, I mean I did just climb the highest mountain in Africa!

After another week of safari in the Serengeti we flew home and it was time to get serious about my triathlon training! I was 5 months out from EagleMan 70.3. I remember e-mailing my coach telling her I had a pulled muscle and wasn’t able to run. So I started training by only swimming and biking. My calf was very painful, but triathletes have a very high tolerance for pain (and are just that stubborn). I refused to go see the doctor. I knew that if I rested it, iced, and took anti-inflammatories it should go away. And sure enough it did! My leg felt better after a couple weeks (later I found out this is because a giant chunk of clot broke off and went to my lungs). So with a healthy leg I started running and training hard.

I realized that my splits were much slower than usual. I told myself that this was because I took a month off to go to Africa and was out of shape. So I started pushing myself harder. I even almost blacked out in the middle of the pool during a time-trial test. I just figured I was dehydrated. Writing this makes me realize how stupid I was… ALWAYS listen to your body!

During the 4th week back from Africa I started getting out of breath doing simple tasks (like walking up stairs, talking on the phone, making a sandwich). The last straw was blacking out during a track practice. That night I went to the ER. And drum roll please…….. DVT (Deep Vein Thrombosis, or blood clot) in the leg’s popliteal vein and massive bilateral pulmonary emboli (PEs) in the lungs. For the amount of clot I had I was lucky to be breathing still, let alone trying to swim, bike and run.

The doctors could only hypothesize how I got my clots. The long plane flight to Africa, my slow heart rate, altitude sickness caused by high elevation, severe dehydration from summit day and birth control pills created my perfect storm of destruction. Sometime after returning home, the clot in my thigh to groin broke off and went to my lungs. This is where I count my lucky stars (30% of people with untreated PEs die. I went over a month before going to the ER).

So I got nice and settled in the hospital while they monitored the PEs. I chose to go on the new blood thinning drug Xarelto over Coumadin. No more Lovenox shots in the tummy! While in the hospital, I spent my days googling the scary statistics of blood clots (which I’m sure some of

you are doing right now). I feel so fortunate to have found Stop the Clot and the Clot Buster athletes. I went to them for inspiration during the following months of recovery – which were TOUGH. Small victories were climbing the stairs in the hospital, going for a walk, then finally jogging one whole mile. But there’s always a light at the end of the tunnel!

I wanted my light to be something huge. I wanted to go out there and celebrate life! I felt so fortunate that I wanted to do something monumental for those that have suffered from clots, those that have passed away, and those that will suffer in the future. I registered for Ironman Cozumel knowing that even if I couldn’t cross the finish line, showing up at the starting line was already an accomplishment.

I made it my personal mission to raise awareness and prevention of these nasty little blood clots by racing for the National Blood Clot Alliance. I raised $6000 along the way! Most importantly I wanted to set an example that having blood clots does not mean you cannot continue to do the things that most inspire and challenge you.

On December 1, only nine months after being diagnosed with DVT/PEs, I became an Ironman! I really took the whole experience in and enjoyed every second of it. I had a smile on my face for almost the entire race (ok last few miles were ugly)!

So even if you’re on bed rest right now in the hospital or still on blood thinners, keep your head up. Take it day by day. And always live life to the fullest. You’ll be back before you know it!