Skip to main content
Home / Patient Stories / Don’t Stop Until There is an Answer: Becca’s Story

Don’t Stop Until There is an Answer: Becca’s Story 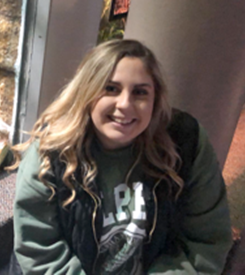 Don’t Stop Until There is an Answer: Becca’s Story

At 19 years old, I never knew how much blood clots could affect my life. I worked at a daycare center all summer and, as a result, I was active every day chasing and playing with kids. One day, I woke up with severe back pain. I brushed it off at first, and blamed the pain on a poor sleeping position. The pain persisted for a few days more, and I found myself at a local urgent care center. I was diagnosed with a back strain, which made sense with all of the lifting I did each day at work.

Although I was given muscle relaxers, the pain never ceased. It instead began to spread to the back of my left leg. This new pain would not go away, and I made a visit to the nearest Emergency Room, seeking a better answer to what was going on. This hospital did an X-ray, and I was diagnosed with a muscle spasm in my lower back. I was treated with a different muscle relaxer, and sent home.

Two days later it was moving day for me and my sister. We were so excited to share a new apartment. From the moment I woke up that day, I knew there was something off about my entire left leg. There was an odd pain and stiffness to my leg, but I ignored it, because we had so much to do. Later that afternoon, I awoke from a quick nap to find my leg had turned bright red. It was warm to the touch and extremely swollen. I asked my sister to drive me to a different hospital, where I was diagnosed with several blood clots in my left leg and left lung.

The doctors on my team were very confused at first. They wondered how a seemingly healthy, 19-year-old girl could have blood clots. I didn’t smoke, even though I was asked that several times to be sure, but I had just started an estrogen birth control pill a few months earlier. The doctors believed that could be the cause. I ended up testing positive for the heterozygous form of factor V Leiden (FVL), meaning it only came from one of my parents. It was a disastrous mix with any form of hormonal birth control. My brother and sister were soon tested, and my brother came back positive for FVL too.

Living with blood clots and being on blood thinners for a year definitely changed my life. I had to change medications several times because I was unresponsive to some of them, and I visited the doctor more times than I could count. I was constantly worried about throwing another clot to my lungs. Since I have the heterozygous form of FVL, and I am so young, my doctors told me that I did not need to continue blood thinner therapy once the clots dissolved.

If you are concerned about your health, my advice is to keep looking for answers until one is found. If I had not continued to seek medical attention, I could have had a far worse looking future. Today, I am clot free and visit my doctor once a year unless my symptoms arise again.