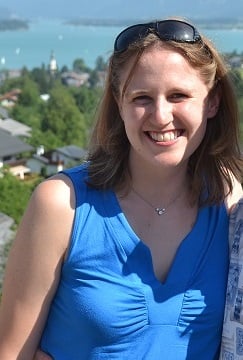 I was 25 years old in January 2011, and I knew nothing about blood clots.  Several months prior to that January I felt a mild, irritating pain in my right side.  It occurred mainly when I was laying down too long, hiccupping, or when my breathing was heavy.

I went to my doctor; she ordered an ultrasound that found nothing.  I knew something was wrong, but my doctor didn’t push me to do more, so I didn’t worry.  In fact, she told me it was probably heart burn and to take heart burn medicine. Then in January of 2011, my life changed.  A minor car accident prompted me to get a new family doctor and he was very concerned about the pain in my side, which had grown worse. He ordered an MRI; however, four days before the MRI, on Monday, my left leg began to hurt.  I had actually limped my way through my tutoring job on Tuesday. As in many other stories I have read, I thought I had pulled a muscle. By Wednesday, my leg was so swollen, sore, and red that I called the doctor.  He told me to go straight to the E.R. (Emergency Room)

In the ER, I received the news: I had a massive blood clot in my left leg that stretched from my thigh to just below my knee and a clot in my lung on the right side. The clot in my leg was so large that I was taken into surgery the next morning to have it removed.  I began to cry.  I only knew of one other person to have a blood clot, my best friend’s grandmother, and she had died from it.  I was incredibly scared.

The cardiologist doing the surgery would become a familiar face over the next few years.  He spent three days entering my veins from behind the knee to remove the clot.  During this time he also found multiple clots in my abdomen, which he also removed.  I spent three excruciating days lying flat on my back, unable to move for fear the clots would shift and go to my lungs or heart.  After five days in the hospital, I was released on warfarin.

After the surgery I suffered from post-thrombotic syndrome (PTS). (PTS results from the damage blood clots can cause to veins, resulting in chronic symptoms include swelling, pain, and discoloration of the skin.) My left leg never totally healed and would swell and hurt constantly.  I wore a compression stocking at all times.  My doctor kept hoping that I would heal especially with how young I was, but I hit a plateau in healing.  I also dealt with the fact that my cardiologist and hematologist couldn’t pinpoint why I had this blood clot.  Everyone assumed that my birth control was a factor, but such a large blood clot had to have been caused by another underlying condition.  I was tested for everything, but everything came back negative.  Things became more confusing when my dad got a blood clot just a few months after mine.  He was hospitalized and a test for Factor V Leiden came back positive.  I was tested twice for this genetic blood disorder and both times I was negative.  (My dad was later released from the hospital and is doing great, though as a pilot he must be very careful and give himself a Lovenox injection before flights.)

A year went by and I was emotionally distraught because my healing progress stalled.  I was now 27 years old, and my leg hurt so much that I couldn’t run, jump, or be physically active for any length of time.  I began to wonder how this would affect me when I became a mother, since my husband and I were beginning to discuss having children.  Would I be able to keep up with my kids?  Would I be able to carry my kids?

Over a year later, my doctor decided I was not going to heal further and he wanted to explore another avenue.  He told me about May-Thurner Syndrome (MTS), a rare condition that strikes women in their 20’s to 40’s. MTS is where a vein in the leg is compressed by an artery in the leg, which increases the risk of a DVT (deep vein thrombosis or blood clot) in the left leg.  The doctor said the only way to know definitively if I had May-Thurner Syndrome was to do exploratory surgery. I went through with the surgery November of 2012.  The diagnosis was confirmed and a stent (tube that keeps blood vessels open) was placed in my abdomen.  I immediately felt blood flow in my leg that I hadn’t felt in a long time.  A few months later, my left leg was not completely healed but it had greatly improved.

This experience taught me to advocate for myself.  I know when something is wrong with my body. If I had pushed my first doctor to do more, I may have avoided much of what I went through.  Having the right doctors makes all the difference in the world.  Surround yourself with a knowledgeable team of people who are willing to listen to your concerns, and who are willing to do whatever it takes to solve your medical issues.

Today, my leg is still not perfect, as it will hurt when I am very active, and change colors to red and purple. I wear my compression stocking every day to relieve the discomfort.  There are little things I have to be careful of – like I can’t sit with my legs dangling (high bar stools are the worst) and I can’t jump, or run for long before hurting.  However, I have been told that my symptoms are pretty mild compared to others with post-thrombotic syndrome

This has not stopped me from anything though.  I am an avid skier and traveler.  My husband and I took a two-week trip to Germany last summer during which I hiked in the Swiss Alps!  I also have a trip planned for San Juan coming up in March during which I will be zip-lining through the rain forest! Another development is that my husband and I took this as a wake-up call to get healthy.  I lost over 30 pounds and he lost over 40.  My main concern at this point, though, is that I want to start a family in the near future and there is not a lot of research on May-Thurner Syndrome, stents, and pregnancy.  I would be happy to update my story in the coming years as I start down that path.

I am 28 years old and I survived life-altering blood clots.