In Memory of Ashleigh Littlefield: Her Blood Clot Story 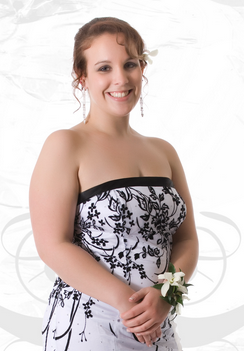 In Memory of Ashleigh Littlefield: Her Blood Clot Story

Ashleigh’s Blood Clot Story, as told by her mother:

The day life changed forever.
I am a hardworking wife, mother, daughter, sister and friend.  I have raised three amazing children and been married for just over 25 years.  My family is very unique as we live close to each other and most of us work together in a family business. I am writing to share my story about how a blood clot changed our lives forever.

First, I would like to tell you about my Ashleigh – my first-born.  She was a wonderful child. She and I had a relationship like no other – she became my best friend as she grew, and the love I felt for her was amazing.  She graduated from high school in 2009. During her high school years, she was active in drama and show choir.  She loved being on stage.  Her goal was to go to cosmetology school after high school and she was well on her way.

In May of 2010 my daughter, Ashleigh was a busy 18-year old. She loved her younger brother and sister so much and they were fun to be around.  We had just returned from a family cruse vacation in April and had made some amazing memories.  Ashleigh had a wonderful boy friend. She was a cosmetology student with just about 150 hours left before she graduated and she was happy.  Growing up she had some health problems with acid reflux, but for the most part she was pretty healthy.

It was Memorial Day weekend and we were looking forward to her coming home on Sunday night for our annual BBQ on Monday.  She had been texting her brother most of the day, and we had made some fun plans at home for a family day.  She was driving home from her boyfriend’s home, which was about an hour away.  Ashleigh had spent the day laying in the sun and visiting with Rick and his family. She never told me that she didn’t feel well during the day.  She drove in our driveway at about 7:00 Sunday night – she walked up our driveway and on to our deck.  Her dad watched her put her hand on the door and fall backwards.  She never opened the door to get into the house.  She dropped on our deck and in seconds her dad and I were at her side; her brother and sister were standing watching.  I immediately called for an ambulance and within a few minutes her dad was doing CPR and the ambulance had arrived – she came to for only a few seconds to look at her dad and say she was having hard time breathing – then she was gone.

They transported her to the hospital and an hour after we arrived we were told our healthy 18 year old daughter was gone.  I believe we watched her die on our deck within minutes of her driving home, but I am grateful to all the people who tried to save her life.

After she died, there were many unanswered questions and many thoughts and ideas of what happened to her.  After nearly 7 months of wondering we received the autopsy results that told us that our daughter had died from a pulmonary embolism (blood clot in the lung).  This was just unbelievable – didn’t those have symptoms? Wasn’t that treatable?  How could that happen to a young girl, no recent surgery or long trips?  No reason why she would have a blood clot.  It has taken many phone calls, many letters, many questions and 1 simple blood test to understand how this may have happened.  Ashleigh had prothrombin (a genetic clotting disorder), she was on the birth control pill, and we believe that is what caused her blood clot.  We have now learned that her father, her brother, her sister, her paternal grandmother and several of her siblings are all positive for prothrombin too.

I am hopeful that through sharing my story and information about this genetic disorder with others that maybe, just maybe it will make a difference in a life.  Maybe a young woman won’t suffer a miscarriage… Maybe a young girl will wake up tomorrow to create a lifetime of memories…. Maybe a mother won’t have to choose between a cardboard box, or a maple casket for her beloved daughter….

If research is true and approximately 5-8% of the US population has one of these clotting disorders and more than 60,000 Americans die each year from a blood clot (from the Centers for Disease Control and Prevention), then how can we make a difference to that percentage? Look around and think that of 100 people you know and know that nearly 8 can have this disorder.  Think about all of your family members and wonder how many of them may have a blood clot silently within their body.  Think about your wives, husbands, kids, and friends – wonder.

While I realize that many people live with this disorder for years or maybe a lifetime with no symptoms – I know of at least one person that did not.  Ashleigh was young; she was an amazing young woman who had so much to offer. I believe she would have made a difference. During a scholarship interview back in 2009, she was asked why she wanted to go to cosmetology school. She responded to the committee, “I want to have the chance to make people feel beautiful.” I know she would have made a difference, and maybe through her death and our willingness to share her story about this disorder, she has made that difference.