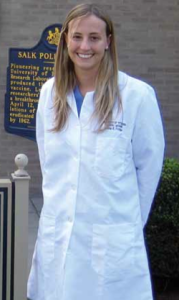 As dentists, we are continually updating our knowledge about oral cancer, bacterial endocarditis, diabetes, cardiac disease and all the many ways they intertwine with what we are planning for our patients’ oral health needs. We are also tuned into the signs and symptoms of stroke, heart at- tacks, high and low blood pressure, and a myriad of other medical conditions that our patients present us with.

Two years ago, we came face to face with signs and symptoms we did not associate with two of the most common and potentially fatal medical conditions: Deep Vein Thrombosis (DVT) and Pulmonary Embolism (PE). On May 20, 2010, our daughter, Anna Frutiger, died from a massive pulmonary embolism as a result of an undiagnosed deep vein thrombosis. She was healthy, beautiful, an athlete her whole life, and was living her dream of following us into the dental profession. None of us could have expected that a blood clot would end her life one month after her 23rd birthday, just as she completed her first year of dental school at University of Pittsburgh School of Dental Medicine.

Anna’s story has been shared over the past two years time and time again. The resulting ripple effect has saved lives time and time again. When we approached Dr. Merchant, a former instructor of ours at University of Detroit Mercy, about including something in the MDA Journal about blood clot awareness, she didn’t hesitate. In fact, we quickly were in collaboration with two medical specialists who were enthusiastic to have dentists know more about DVT, PE and blood clots. In addition, they felt it was so important that we also had the latest updates in anticoagulant protocols for our patients. As they pointed out, dentists are in the unique position as health care providers to see generally healthy people at least once or twice annually. While we typically don’t have conversations about blood clots with our patients, we are in a perfect position to educate them and others about potential side effects of medications they may be taking that would contribute to blood clots. We can also make them aware of signs and symptoms that could be life threatening if ignored.

Anna’s story is important because we need to know that blood clots can happen to anyone, at any time, and at any age. Anna was the picture of a happy, healthy young woman who took impeccable care of herself. She exercised daily and was training for a half marathon. Four months before she died, she started complaining of pain behind her knee and in her calf. Initially she thought it was possibly a muscle pull, but kept telling us it felt different than muscle strains she had experienced so many times as a dancer and athlete through high school and college. She also mentioned that she often felt short of breath when she exercised. But it was easy to attribute both symptoms to the stress and fatigue of being a dental student, which is what she did at first.

When her leg pain persisted, she eventually saw an orthopedic surgeon who found no injury to suggest a muscle pull. After a thorough physi- cal and review of her medical history, her doctor suspected a blood clot in her lower leg. Anna’s only known risk factors were taking a third-genera- tion oral contraceptive. The results of an Ultrasound/Doppler of her leg were negative for a DVT. At a follow- up exam three weeks later, her leg was of normal shape and size, her pain was minimal, and her doctor discharged her.

After her first year of dental school finals Anna traveled with us to Aruba over her spring break, then visited friends on the east coast on two con- secutive weekends after that. Be- tween two airplane trips over her break and then an eight-hour bus ride the weekend before she arrested, Anna experienced hours of uninter- rupted travel. She called when she got home and was experiencing short- ness of breath as she climbed the stairs to her apartment. She was also experiencing an overall fatigue that she could not explain. We talked about the stress of dental school, en- couraged her, and urged her to get some rest before classes started the following day.

The next morning, Anna called her best friend to drive her to school because she felt extreme weakness and didn’t think she could walk to catch the bus. Anna collapsed on her lawn outside her apartment after walking down the stairs, and blacked out for several seconds. Her room- mate and friend called 911 and an ambulance arrived within minutes. Anna was conscious at that point, and asked her friends to call us. 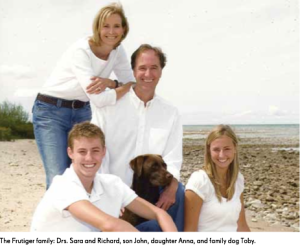 Anna made it to the emergency room, but almost immediately after her arrival suffered a cardiopulmonary arrest. She was immediately taken to surgery to try to dislodge the huge blood clot that caused her massive PE. Over the next two days, a team of doctor and nurses worked round the clock to keep Anna alive. We hoped a miracle might happen; it was something we wished for with all our hearts. Our family was on a roller coaster of emotions, as Anna occasionally would move her arms and we prayed she would awake from her coma. When neurological tests eventually showed that she no longer had brain activity, we were devastated and had to make the decision to take her off life support.

Anna’s doctors immediately con- sulted with us and encouraged ge- netic testing for blood clotting disor- ders. We all tested negative and had no family history of blood clots. An- na’s autopsy determined that she was not predisposed to blood clots, and it seems that the oral contraceptives and her concentrated travel in the month prior to her death were her major clotting risks.

We know that Anna was very tuned into her health and her body. Most people, and especially 23-year- olds, do not suspect that anything fatal is brewing. We know she did not link her birth control pills and short- ness of breath to her leg pain or the possibility of a DVT. Although her doctor suspected a blood clot, he saw her as low risk. Moreover, the Ultra- sound/Doppler testing is effective for DVT diagnosis only three out of 10 times. This is why we believe strongly that had Anna or we possessed the awareness and knowledge of the risk factors and signs of DVT when she was having symptoms, Anna would be alive today.

We are committed to doing every- thing possible to support public aware- ness of blood clots. We know that awareness of signs and symptoms of DVT and PE helps save lives. As we mentioned, Anna’s story has already saved the lives of several individuals who had similar symptoms and sought medical care for blood clots or testing for clotting disorders. We believe our dental practices are a logical place to reach out to people who may potentially be at risk for developing a blood clot and encourage you to find a way to share this information.

We have become very involved in the National Blood Clot Alliance, a non-profit advocacy group whose work is to raise awareness and pro- vide education. We encourage you to share Anna’s story with those you care about.