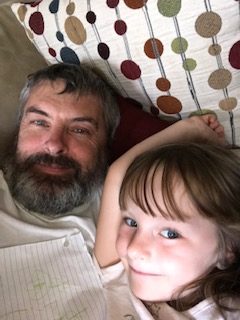 My name is Tim. I was born, raised, and still live in Salem, Arkansas. Salem is a small town with many people raising cattle. My Dad always had a few heads of cattle and, growing up, I would get on calves trying to ride them. I grew older and started getting on young bulls until I was fifteen and began riding bulls in rodeos. A broken collarbone, many bruises and scrapes later, I was getting good at my game.

I was 25 years old when a bull stepped on the back of my leg while I was practicing riding. I had a bruise the size of a grapefruit on my calf. A few weeks later, my leg swelled and I could hardly walk. I was taken to the Emergency Room (ER) where a doppler scan was ordered, and it was determined I had several clots in both of my legs. Nine days later I was released from the hospital, and five weeks later I returned to my job. I was on blood thinners for six months. My life went back to normal.

Twenty years later, or in September 2014, I stepped down from a boat trailer and felt a pop in my thigh.  Three days after that, I was back in the ER. I had torn a muscle in my thigh, but worse yet, I had clots in my left groin. This being my second episode of blood clots, many tests to look for underlying clotting disorders were done. It was discovered that I have factor V Leiden (FVL), post-thrombotic syndrome (PTS), and several occluded or blocked veins in my legs.

Learning all of this was the beginning of a drastic life change for me. I had been very active up to this point, but now I am very limited in my activities. I deal with depression after being forced to retire from my job of 26 years due to my health. I cannot play with the kids like I always have, and it is very difficult for them to understand why. I have been on a direct oral anticoagulant (DOAC) since 2014 and will be on some form of blood thinner for the rest of my life.

I am 50 years old now, and I have a spinal stimulator that was implanted to relieve my leg pain, but it has not been very successful. My doctor has advised against stenting, due to concerns that the stents could fill will blood clots and cause worse damage. I am dealing with my situation for now, until I am forced to take other measures. Some days are good, and I can get out and do a few things. Some days I can hardly move my leg because of swelling and pain.

I have been very fortunate that no clots have moved, or I would not be writing this. Many people have no idea how a blood clot can change a person’s life. I can say my life has been very much a struggle after my experiences. I feel I have been blessed, though, because God has allowed me to continue to live with this problem, as many people who have blood clots never know until it is too late.