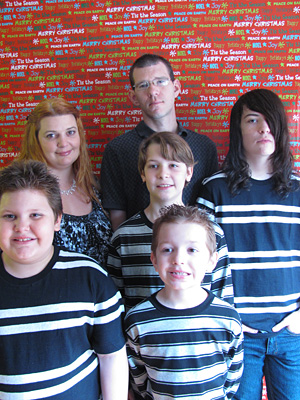 Hello my name is Elizabeth. I have a 15 year-old son named Ryu. This is my son’s story.

In October of 2012, I noticed my son’s leg was changing color. His leg looked purple. I wasn’t sure why. I took him into an Urgent Care Center, where I told the doctor that it looked like he had a blood clot. She ordered an ultrasound of his leg.

We were in the ultrasound by noon that same day. They told us we had to take him to the Emergency Room (ER) – that he definitely had a blood clot. So, we got to the local hospital and they transferred him to Phoenix Children’s hospital where they discovered he had a clot from the back of his knee up to his hip. We didn’t know what we were going to do. I was scared I was going to lose him.

They ended up doing seven procedures to try to get the blood clot out. He was in the hospital for two weeks. The doctors discovered he had Factor V Leiden (a genetic clotting disorder) and also what is known as May-Thurner Syndrome (MTS). MTS is where a vein in the leg is compressed by an artery in the leg, which increases the risk of a DVT in the left leg. It was insane. They tried to flush out the clot and it came back. By the sixth procedure I was ready to say stop we’re going home, but we decided to do one more time. The doctors finally flushed out the clot they had to put a stent (a mess tube that keeps veins open) in place to prevent more clots because of the May- Thurner.

My son has been on blood thinners for a year now. It’s difficult for him to adjust to being on life long blood thinners. Never being able to ride roller coasters or play any sports has been hard for him. I also was told that my other two sons and I also have Factor V Leiden, but so far only one family member other then Ryu has had a clot.

Through it all my kiddo stayed positive.  He went through so much and now has to be on blood thinners for the rest of his life. Still, I am grateful for the Hematology Doctors and the staff at Phoenix Children’s because we could have lost my Child. So to all parents that have to deal with blood clot issues, I understand your pain and I hope this brings you comfort for everything my family went through.