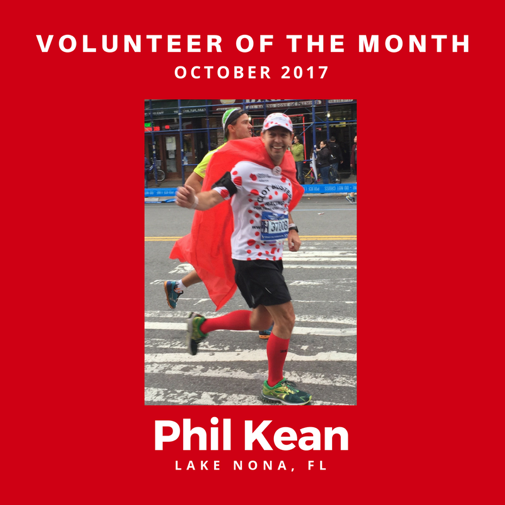 “Being a two time survivor of pulmonary embolisms (blood clots in my lungs), this cause is near and dear to my heart. Blood clots are responsible for 274 deaths per day in the United States.” – Phil Kean

As NBCA kicks off its fall running season, we are honoring marathoner and two-time pulmonary embolism survivor Phil Kean as our October Volunteer of the Month. In March 2015, Phil applied to run the 2015 TCS New York City Marathon with Team Stop The Clot®.  He committed to raise $2,500 at a minimum, with a larger fundraising goal of $10,000 in mind. Phil had already run marathons in 35 states, and he was on a mission to run a marathon in all 50 states. However, since he had already run NYC, his mission for this race was different, and aligned closely with NBCA’s mission. Phil said, “I wanted to run for the education of my friends and to make a difference.” As a survivor of blood clots, Phil understands firsthand the importance of being able to recognize blood clot signs, symptoms, and risk factors. Phil is determined to do everything he can to help raise awareness and share life-saving information.

In a few short months, Phil raised an astounding $51,665 through his fundraising and awareness efforts. It is the most ever raised by one of our team members. During this time, Phil broke every NBCA fundraising record in the book. He spent the day before the NYC Marathon painstakingly drawing hundreds of circles – in which he wrote the names of each of his donors – on a red cape that he wore during the race on the following day. Phil’s upbeat spirit and passion to make a difference is contagious, and we could not be more thankful for his involvement with NBCA.

Phil’s commitment to NBCA and our mission extends far beyond running. He is also an architect and principal of the architecture firm Phil Kean Designs. In 2017, Phil’s firm was selected to build the New American Home, which is a model home for the International Builders Show. In celebration of this achievement, Phil hosted the New American Home Soiree in January 2017, which was an event dedicated to raising funds for NBCA’s new research campaign. The Soiree raised more than $65,000, and these funds will make a difference in the lives of many individuals.

Phil, you are an inspiration. We are grateful for your dedication to raising funds and awareness, and we look forward to a continued partnership with you.

Congratulations to NBCA Board Member, @GaryRaskob on his new role as Senior Vice President and Provost for the OU Health Sciences Center at the University of Oklahoma. We could not be more grateful for his commitment to the NBCA community over the years. https://bit.ly/graskob