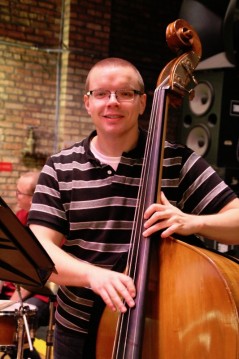 In early August 2015, after getting back from a tour — I’m a military musician — I noticed that my right calf/ankle area was more sore than normal following a long walk I had taken. I waited. I did a squat or leg day workout on Monday, and noticed that my right leg was taking a while to recover. It had some impact on my strength and balance. I waited. By the time Friday hit, it hurt to walk on my right leg, so I made an appointment to see my doctor.

At the Doctor’s office, they weren’t sure what was wrong with my leg. My ankle/lower calf area was pretty swollen and it hurt to walk, but I didn’t remember hitting it. So, they did an X-ray to check for a fracture, and then as a precaution sent me to the lab to get some blood work. The Doc thought there was a very, very small chance I had a clot.

Fast forward to the middle of this same month, and I’m on a break from work. My phone starts to blow up with missed calls and voicemails from the Doc’s office saying, “Go to the ER as soon as you get this.” So, I let one of my supervisors know where I was going, and off to the ER I went for a series of blood tests, ultrasounds, screenings, and consultations. At the end of the day, I knew that I had at least one blood clot below the knee in my right calf, how to give myself injections, and was started on warfarin.

I met with a hematologist in October. Her opinion is that my clots — I learned I have two — were unprovoked. I travel a lot for work, but that isn’t a new thing. I’m active. I compete as a power lifter, do two to three 5k runs per year, and I’m in the military music program. I’m young at 29 years old. I have no family history of blood clots or blood disorders. After the meeting with the hematologist, my doctor settled on my treatment for the foreseeable future: Warfarin.  I opted against taking a different anticoagulant due to the physical nature of my job.

My medical team is awesome. It is split between the VA hospital and active duty clinics around the Great Lakes area. I know we hear a lot of bad stuff about the VA in the news, but the people working at my branch have all been awesome. I have the direct lines for my main doctor, two nurses, the anticoagulation clinic pharmacists, and then have the general Department of Defense Nurse Line, all programmed into my phone. The medical team has been great about answering questions, whether it is about side effects, diet/nutrition, or activities that I can/can’t do. The two ER Doc’s that I saw as well were friendly and very helpful

As far as the impact on my life, it has been mostly positive. I wear a medical alert dog tag. I eat a more consistent diet. I drink less beer. I use apps on my phone to track my INR as well as dose reminders. Overall, I’m more careful and healthy, while still doing the things that I love, often with just a few more safety precautions. The take home point for others is to listen to your body, if it doesn’t feel right, get it checked out.

I’ve yet to have a PE or other major complication. I know that I’m pretty early in this journey, but I’m going to make the best of it.

To learn more about the risk factors associated with blood clots, click here.