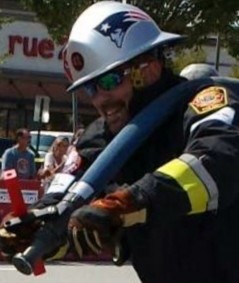 Before that day, I was physically fit. I had recently won the National Championship in the Firefighter Combat Challenge. I was a full time Captain with the Fire Department, and the single parent of a 19 year old son, and 16 and 9 year old daughters. I was happy, my kids were happy. Life was good, and crazy, at the same time.

On June 8, 2010, my life changed forever. While responding to an early morning call, I fell 15 feet. I fractured my left leg, and destroyed my left knee. I had surgery in July to stabilize my leg, and it went well. A month later, however, my world began to fall apart. My youngest brother Sean died suddenly of a heart attack at the age of 40. Now, in addition to my injuries, my family and I were crushed with grief over this sudden loss.

Three weeks later I underwent another surgery, and within a week began experiencing pain in my left calf.  I followed up with my physician, who sent me for a leg ultrasound. The ultrasound was negative, but I soon learned they are not always accurate. During a physical therapy session, I became short of breath and began sweating profusely. I didn’t think much of it, and since I had a doctor’s appointment that day, I just decided to wait and ask him.

My doctor immediately sent me in for a lung scan. The scan showed multiple pulmonary embolisms in my right lung, and some of them had caused permanent damage. I suddenly found myself the center of attention in the emergency department. I was on oxygen and two blood thinners. I am a paramedic, and I finally understood what was happening. The doctors told me this was often fatal. I felt an overwhelming sense of doom and anxiety.

I was in a state of shock.

After several weeks of being stabilized, it was time to resume the battle to repair my leg.

>Due to the extent of damage to my knee, the surgeon recommended a knee replacement, but I had heard of an experimental surgery called autologous chondrocyte implantation (ACI). During this procedure, cartilage is removed, grown in a lab and then injected back into the patient in hope that it will grow. Even after everything I had been through, it seemed better to me than a knee replacement. I had to stop taking blood thinners for the surgery, so I had a permanent IVC filter inserted to prevent any clots that might form from reaching my lungs.

After the surgery, I was unable to walk without assistance for a year. I eventually started back at the gym, slowly. Doctors had determined that I did not have a clotting disorder, but there was a difference of opinion about whether blood thinners were still necessary. I chose to stop taking them.

Then, there was another life-changing event.  I was working in my backyard and suddenly felt severe back pain and weakness in my lower extremities. I thought I had injured my back, so I drove myself to the local hospital. They looked at me and took me right in. Within 30 minutes, I was in an ambulance, on my way to a hospital in Boston, on blood thinners and painkillers. When I arrived at the hospital they told me my IVC filter was completely clogged and that I had an 11 inch clot extending from the filter down into my renal and thoracic vein, which was causing the pain. They told me they have never seen such a large clot in a living person and that I needed immediate, and potentially risky, surgery.

Everyone was telling me to have the surgery. To this day I don’t know why, but against medical advice, I chose not to have the surgery. I remained in the hospital for a long time on blood thinners and painkillers. When I left the hospital I could barely walk, and I had to begin another long recovery. In addition to the physical and medical help, I also needed psychological help for the “mental injury” all of this trauma had caused.

It took a lot of determination, but a year later I climbed Pikes Peak in Colorado to spread my brothers ashes. My doctors advised against it, but that’s not who I am. I’m not disabled – I’m a survivor. I don’t pity myself, I am just grateful for the opportunity to continue this great life and to spread the word to others like me.