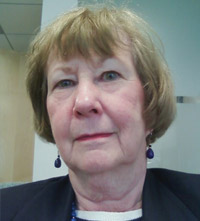 I was recently asked to present to a professional group of thought leaders about my experiences with atrial fibrillation (AFib).  In preparing for that presentation, I put a lot of thought into how I might tell this story and in wondering about how I should start my story, and I realized that I was thinking about having a-fib not just because I was preparing for this presentation, but because I think about it – and worry about it – all the time.

I remember the day I visited my internist and told her that I was having unusual trouble walking a couple of blocks without getting tired and a bit winded.  She checked my blood pressure and listened to my chest, then had the lab do an EKG.  She came back into the examining room and said, “I know why you’re having trouble; look at this.”  She showed me the EKG, with what appeared to be huge spikes that she explained indicated a very irregular heartbeat.  She immediately called a cardiologist, who told her I needed to get to the ER pronto.  First, I had to walk back to my office to get my things, and told my colleague I was headed to the ER.  She accompanied me, in a cab.

It’s interesting going to the ER when a doctor has already called and said you need to be seen instantly.  In fewer than 15 minutes, I was on a cot in the back, being hooked up to a heart rate monitor and  injected with medication to slow my heart rate, while a technician watched to see if the irregularity smoothed out.

Several hours passed and I was moved to a bed, where I did not see a single health care provider until the night nurse came on duty, who told me nothing.  The next morning, my internist came by.  She finally explained partially what was happening and that the cardiologist on call would be coming in.  I told her that I would be leaving the hospital that afternoon, discharged or not.  I told the cardiologist the same thing when he showed up several hours later.  To his credit, he discharged me and told me to see a cardiologist to have my heart ejection fraction checked in two weeks.

I found out what an ejection fraction was by looking it up on the Internet.  I did have it checked and then convinced myself that I was surely in trouble because my heart was basically working at 1/3 capacity.  I was unable to get an appointment with a cardiologist in this area for eight more weeks. Finally, my internist interceded, or I possibly would have waited another month or so.

In that intervening time, I lived in constant fear that I would die.  I was terrified to exercise or exert myself in any way.  I could feel my heart fluttering and was convinced that if I closed my eyes I would never wake up.

Eight weeks later, the cardiologist finally explained it all to me and calmed many of my fears. He convinced me that with appropriate medication and monitoring, I could deal with this. I also had, through my own research, learned that millions of people are affected by a-fib, so I had quite the robust support group possibility!  And I learned, much to my surprise (I wonder to this day why I never knew this), both my mother and one of my brothers had a-fib.

Today, five years later, I still have a-fib, although I no longer feel my heart racing constantly.  I still have the fear that this condition will result in my death.  And, while I know intellectually that AFib can cause stroke and probably not cause a heart attack, I have an obsession about sudden death from a heart attack.  I also hear about people with AFib who have what they call “episodes,” which send them to the ER.  And I’ve asked my cardiologist “what is an ‘episode’?”  He doesn’t respond.  I guess I’m lucky that, whatever an “episode” is, I haven’t been back to the ER.

But I was always the person who was the healthy one, who had the occasional seasonal cold and never took a day of sick leave.  The AFib experience turned me into a constant worrier.  Every time I take a deep breath instead of a shorter breath, I wonder – is it my heart?  Am I going to die?  My appropriate realization of my risk of blood clots and of stroke has been accompanied by a really inappropriate and almost obsessive fear of a heart attack.  Something is wrong with my heart, I think, and if something is wrong with your heart, you are in serious trouble.  One thing I’ve learned is that while a-fib has tangible effects, the intangible effects, including anxiety, are probably just as important.  And surely I am not the only AFib patient, or thrombosis patient, or embolism patient, who possibly could worry herself to death.

If health care providers were to ask me for some tips on how best to serve AFib patients, I have a few.  First, a patient should not have to be in a back-room cot in the ER, followed by a bed on a random ward where there happens to be space, with no doctor or nurse even making a cameo appearance, much less telling the patient what’s going on.  When you come into the hospital through the ER, are hooked up almost instantly to a heart monitor, and then sent for various scans that go well into the night, you worry.  And if this is about trying to calm a racing heart, or reduce out-of-control blood pressure, the last thing the hospital should do is raise the patient’s anxiety level.  And, finally, a patient just out of the hospital who now needs cardiology attention should not have to wait eight weeks to see a doctor.

I think, if I met a newly diagnosed AFib patient, I would tell them all the things I didn’t know – first, this isn’t a rare condition.  There are millions of people who have AFib, so there’s lots of knowledge out there.  Second, your life and your quality of life are in your control.  There are medications you can take, procedures you can try; in the majority of cases, this is not an uncontrollable, unmanageable condition.   So live your life the way it works best for you.

Today, I am truly grateful to have always had very low blood pressure, and I am thankful to see a cardiologist who reassures me that AFib is not going to cause a heart attack.

And let me note that since I’m definitely not a teenager, I know the fluttering along my left side is not produced by that cute guy in homeroom, but by a medical condition that I am controlling because I am aware of it and determined that it will not get the better of me. I’m surviving Afib so far, and hope to survive it for many more years.

Kay Holcombe, a member of NBCA’s Board of Directors, currently resides in Washington D.C.