We have all been taught that blood clotting proteins and blood platelets do one thing– clot our blood to protect us from bleeding. Deficient production or production of defective clotting proteins or platelets results in bleeding disorders. Increased production, increased activity or reduced clearance (elimination) of activated clotting proteins or platelets can result in blood clots or thrombosis. Over the past several decades, we have gained a greater appreciation that proteins in biology tend to have more than one function – allowing for economies of scale and important redundancies. It is not surprising, therefore, to learn that clotting proteins and platelets can be important players in immune defense mechanisms in infection, tissue repair after wounds or burns, inflammation and the growth and metastasis (spread) of cancer – particularly in the process of development of new blood vessels, which is called “angiogenesis”. We have learned several things that indicate a special relationship between cancer and blood clotting, including the following:

when treated with anticoagulant drugs; identifying patients at high risk for these problems is a priority so that anticoagulants might be used most effectively just in those patients who need the drugs to prevent excessive clots and reduce the growth of cancer.

Beyond cancer, clotting proteins may have other functions in infections and inflammation that deserve our attention.

For example, studies of the “living fossil” the horseshoe crab, which is more than 4 million years old, have revealed that these animals use clotting proteins to defend themselves against infections with bugs that live in the sea water that surrounds them. This ancient defense mechanism in horseshoe crabs, called innate immunity, is intimately linked to their blood clotting mechanism. Only recently have we come to understand that innate immunity in humans may also be linked to blood clotting and platelet function; several examples include the following:

In summary, blood clotting and platelet proteins do more than clot blood and prevent bleeding. These examples of other functions in cancer and infections are just a few of the potential uses of these very ancient proteins that we may be able to utilize to treat other diseases. Stay tuned for more developments in this exciting area of research. 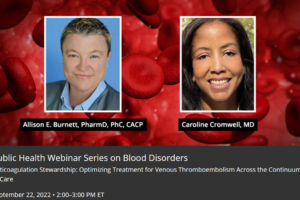 Have you claimed your New Patient Resource Guide yet? NBCA put together this guide for newly diagnosed #bloodclotpatients and their #caregivers to help navigate life, post-diagnosis. Claim your new patient guide on our website: https://bit.ly/nbcapatientguide #patientresource