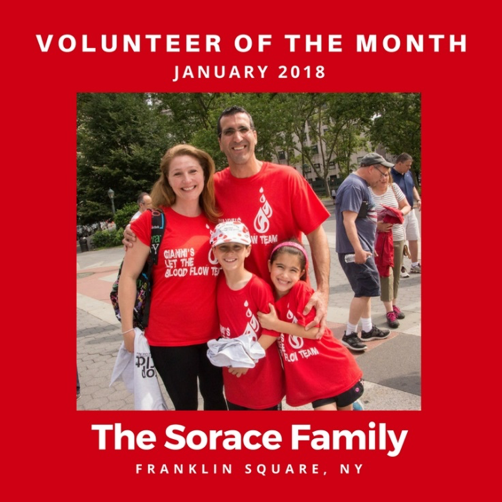 “When doctors told us that it was a blood clot, we could not believe it. We were blind-sided because we did not know much about blood clots and we thought it only happened to adults.” – Gianni’s mother, Rebecca Sorace

As NBCA kicks off the New Year, we are honoring the Sorace family as our January Volunteers of the Month.

This past June, we had the pleasure of meeting Rocco, Rebecca, Gianni and Angelina during the Walk to Stop the Clot® in New York City.  Their story was the inspiration behind one of our most successful fundraising teams and it’s easy to see why.

It was just 3 years ago that Gianni spent the entire summer in the ICU fighting for his life. In April 2014, five-year-old Gianni had a stomach virus and became dehydrated. His parents rushed him to the emergency room after his leg became so swollen and sore that he was unable to put any pressure on it. Doctors eventually determined that a deep vein thrombosis (DVT) was causing Gianni’s symptoms. He was put on a blood thinner and also diagnosed with a genetic clotting disorder, Factor V Leiden, before ultimately being sent home.

Three months later, after getting another stomach virus, Gianni was short of breath and returned to the emergency room where he was initially diagnosed with pneumonia. This time Gianni’s parents knew the signs and symptoms of blood clots and quickly had him transferred from New York to Children’s Hospital of Philadelphia (CHOP) for a second opinion where they confirmed that Gianni did in fact have a pulmonary embolism (PE) or a blood clot in his lungs. The full extent of what he faced was devastating.  In addition to the PE, Gianni suffered a DVT in each leg, and a clot in his inferior vena cava, the chamber of his heart and his subclavian vein. The doctors called this unexplained Thrombotic Storm.  Gianni eventually left the hospital without an official diagnosis, as he tested negative for all possible conditions that could have caused the clotting. Gianni will be on blood thinning medication for the rest of his life.

As much as Gianni has been through, you would never know it by speaking to him. He loves fencing, baseball, swimming and track. He enjoys playing with his friends and traveling to new places to experience nature.  To anyone who didn’t know his story, Gianni is just your typical eight-year-old boy.  But to NBCA, he is the epitome of strength.

After sharing Gianni’s story for our end-of-year campaign, it became clear that we were not the only ones who were inspired by the Sorace family and touched by Gianni’s courageous battle with blood clots.  Together we raised over $40,000 by sharing Gianni’s story and increased awareness that blood clots can truly happen to anyone at any age – even a seemingly healthy five-year-old boy.

Thank you to Rocco, Rebecca, Gianni and Angelina, for everything you’ve done to raise awareness and funds for our cause.  You’ve selflessly shared your experience for the purpose of helping and educating others.  By sharing Gianni’s story, you’ve shed light on the fact that children can fall victim to blood clots too.  We’re looking forward to continuing to watch Gianni grow and thrive.  Thank you for being a part of the NBCA family!