Tara Robison was startled at age 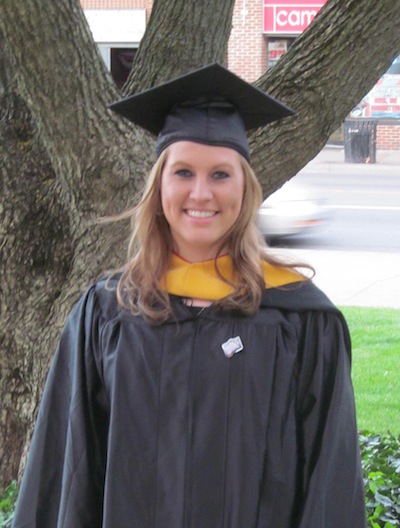 20 by 21 blood clots in her lungs. She was misdiagnosed at first, but her persistence in seeking further care saved her life.

In June 2010, I felt a pain in the right side of my upper chest that I thought at first was just gas pain. I woke up the next morning feeling as if I was in the middle of a battlefield, because I was fighting attempts to sleep, because chest pain was interrupting my sleep, and I even had sit up to sleep. Certain moves worsened the pinching that I felt in my chest.

Nurses I knew told me that it was probably just a pulled muscle or my gallbladder. I felt miserable, so I left work early to go to the nearest medical center. I had a cough, stuffy nose, and this stupid pinching pain in my chest that hurt every time I coughed o breathed in. After waiting hours at the medical center, the doctor listened to my lungs, took an X-ray of my chest, and had me move my arms.

He sent me home with a diagnosis of a possible pulled muscle in my chest, and he ordered an X-ray that showed nothing significant. He noticed some congestion in my lungs, but said it was not serious. Little did I know at this time that my symptoms were signaling blood clots in my lungs.

Four days later, I finally went to the Emergency Room (ER) because I felt even more miserable. It took fewer than five seconds after the doctor told me that a CAT scan showed that I had 21 blood clots in both of my lungs for tears to flow down my face, for the ER to become a blur, and the thoughts in my mind blotted out any noise. I felt terrified.

Ultrasounds were done on my legs to try to find a source for my pulmonary emboli (PEs), although there was no evidence of a deep vein thrombosis (DVT).

I felt my mom’s kisses on my forehead as I stared out into the hallway. My mom looked at me and with the bravest voice told me, “You’re going to be okay, baby.” How did she know? What would help me? Minutes after the doctor left, I w as surrounded by nurses. Pinch! I felt an IV placed in my arm. Very rapidly, I was placed on blood thinners and told that I had to stay in the hospital. Pinch! I received a shot of blood thinners in my stomach that burned like a bee sting, and I was told I would have a bruise, since blood thinners may cause one. I was on injected heparin for ten days and Coumadin® for six months.

I also tested positive for factor V Leiden. After one night of bed rest and sleeplessness, my primary physician came. He was extremely shocked by what was happening to me, and told me that he was relieved that I went to the ER, because my age (20) led healthcare professionals to first diagnose a pulled muscle or a cold. From that I have learned: Rule #1: Listen to your body. Rule #2: Do not stop fighting.

Looking back, I waited way too long to go to the ER. I am so thankful that my body was able to keep up and keep me safe.

So here I am now writing this story to inform others of the importance of listening to their body. I am grateful and thankful that I am here today to write this story. I was on oral contraceptives when the episode occurred, which added to my risk, and which I have stopped taking. Had I known I had a clotting disorder I never would have taken any oral contraceptives and I believe that women need to be aware of the potential of clotting disorders adding to the risk of blood clots.

Blood clots are terrifying and can develop without any warning signs and be unpredictable in their impact on the body. I will not lie, I wonder what is going on inside my body and if a clot is going to strike again. I need to stay motivated to use as many preventive measures as possible. Stories like mine and the other brave individuals who tell their stories need to be shared. National Blood Clot Alliance is a phenomenal organization and should be utilized for its resources, awareness, and support.

Click here to review the signs and symptoms of DVT/PE.