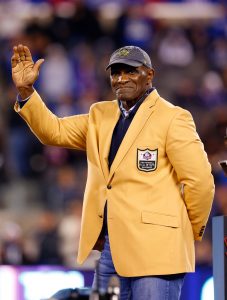 Harry Carson, a two-time National Football League (NFL) Linebacker of the Year, is no stranger to pain. He spent 13 seasons playing in the National Football League, was selected by his NFL peers nine times to play in the Pro Bowl, and is a Pro Football Hall of Famer. He’s big. He’s strong. He’s physically fit. Carson, however, is not immune to the same health issue that strikes nearly one million people in the United States each year: Potentially life-threatening blood clots.

Today, Carson, who received his Bachelor of Science Degree in Education before kicking off his professional football career in the NFL, is retired from professional sports, but remains active with numerous business and sports broadcasting initiatives, and also dedicates his time and talent to a number of charitable activities, including important health awareness programs that allow him to exercise his skills as an educator and health advocate.

For Blood Clot Awareness Month 2019, Carson is teaming up with the National Blood Clot Alliance to help raise awareness about blood clots by sharing his personal story with others and demonstrating that dangerous blood clots can happen to anyone.

“Having been a professional athlete, I’m used to enduring pain and just brushing stuff like that off,” says Carson, who has suffered two bouts with blood clots, including a pulmonary embolism, in recent years. “At the same time, as an athlete I also know to listen to my body, and my body was telling me something was definitely wrong.”

Carson, whose illustrious football career culminated in a Super Bowl XXI Championship in 1986, describes himself as a man who is used to being in control ­– just getting up and going whenever he’s ready to get up and go. So, it was routine for him to hit the road when he traveled with the same level of record-setting determination that marked his impressive football career.

“I was heading south a few years ago on business, and just like I had done many, many times before, I followed my routine and took only limited breaks as I flew to North Carolina, and then drove countless miles from North Carolina to Georgia, then Mobile, Alabama. I took part in an hour-long meeting and then proceeded to drive all the way back up to North Carolina again to board my return flight to New Jersey where I live.”

For Carson, who grew up in South Carolina, and who makes frequent trips like this to connect with family, friends, and business associates throughout the country, this type of itinerary was not unusual: Hour upon hour of traveling hundreds and hundreds of miles all while confined with limited mobility in a car or an airplane.

“I never connected the travel I was doing with any pain or potential harm,” Carson says. “I didn’t realize the importance of stopping more frequently and getting out of the car, or standing up in an airplane, to walk around and stretch my legs.”

That all changed the day after Carson returned from this recent road trip and when he felt a sharp pain in his calf.

“I was at home and getting ready to go to the gym that morning, and I felt a tightness in my calf, similar to a muscle cramp, and I didn’t think much of it,” Carson explains. “Then, suddenly, it felt like something had exploded in my calf, and so I decided to skip the gym and just rest for a few hours.

“Later that afternoon, I started to think that whatever this was, it could be serious, and it might be a good idea to get it checked out. I went to the hospital and the doctors there did some testing. As they talked to me about the results, it was pretty easy to accept the theory that the travel had resulted in a clot in my leg, but when the doctors told me I also had a clot in my lung, that was really scary and a much bigger deal for me,” Carson stresses. 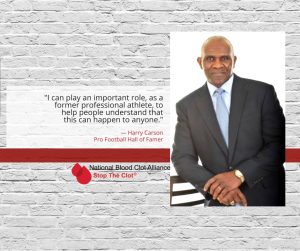 Following his diagnosis in the ER that day, Carson received an injectable anticoagulation therapy or blood thinner, and spent one night in the hospital. The next day, he was discharged, and prescribed a blood thinning pill that he was to take for the next several months.

“It’s a good thing that I took myself to the hospital and didn’t just brush this off,” Carson says. “That’s what a lot of people might do, particularly men or people who are very fit or athletic. Instead, I listened to my body, got the medical attention I needed, and avoided a real crisis or something really much more awful.”

After this experience, Carson, whose doctors told him he has no genetic clotting disorders or significant risk factors other than the extended periods of immobility associated with his rigorous travel schedule, made a point of being extra careful on long road trips. He made sure to stop more frequently to stretch his legs when travelling by car, and, when travelling by air, wearing compression hose and also getting up to walk around a lot during his flight.

Despite his best efforts, a few years later in 2017, when driving back from a trip to South Carolina, Carson was trying to beat the clock and get home at a certain time to ensure that his wife Maribel, who was travelling with him, would be able to keep an important scheduled commitment. With heavy traffic working against them, Carson took fewer stops to stretch his legs and walk around. Shortly after arriving home, he felt the familiar pain in his calf again. This time, he knew exactly what it could mean, and he quickly headed to the hospital, where he learned he had a recurrent clot in the same leg. Fortunately, this time he did not experience a blood clot in his lung.

After experiencing two blood clots, Carson has worked closely with his physician to make sure that he is taking steps to prevent another blood clot now and into the future. About one-third of people who experience a blood clot in their limb or lung will have a recurrence within 10 years. Like many people who experience a recurrent clot, Carson’s physician says that it’s advisable for him to be on a blood thinner medication indefinitely, or for the rest of his life.

“My wife was with me when the doctor said he wanted me to stay on my blood thinner medication for an extended period of time and maybe even for life,” Carson explains. “As far as we were concerned, there was really no question. You do what you have to do to protect yourself from blood clots and stay well.”

In recognition of Blood Clot Awareness Month, and through his collaboration with NBCA, Carson is hoping to help educate people about the signs and symptoms of blood clots. Despite the dramatic impact of this pressing public health concern – on average, one person dies every six minutes due to a blood clot – research shows that fewer than one in four people have any recognition of blood clots or their signs and symptoms.

“I can play an important role as a former professional athlete to help people understand that this can happen to anyone, and I also can help get the attention of men who might hear about my experience, relate to me as a regular guy, and learn something about what to do if it happens to them.

“Too often, men want to be tough and brush things off. I get that and all men can be like that, but when it comes to your health, you really need to step up and take care of yourself. If you won’t do it for yourself, do it for your family,” Carson adds.

When asked how blood clots have affected his life, Carson refers to his “new normal.”

“Every day before my blood clots, I was used to doing whatever I wanted to do. Now, I get up knowing that there’s medication that I need to take every day,” he says. “I know that I have to be the Chief Executive Officer of me. I have to be responsible for myself and my health. I have to take my medication daily, eat healthy, remain fit, and stay hydrated, for example.”

Blood clots do not discriminate. They can happen to anyone regardless of age, race, gender, or fitness level. Each year in this country, about one million people are affected by blood clots, and about 100,000 of these people will lose their lives, which is greater than the number of deaths due to AIDS, breast cancer, and motor vehicle crashes combined.

“I consider myself lucky, because I listened to my body and I survived,” Carson adds. There are others, including some of my contemporaries in the professional sports world, who have not been so lucky. I want everyone to understand these important health issues and the risks that exist.”

Being immobile for an extended period of time can be a specific risk factor for people, like professional athletes, who are required to travel frequently. Other major risk factors for blood clots include: Surgery, physical trauma or injury, hospitalization, cancer, being overweight, being age 55 or older. If you’re a woman, additional risk factors include pregnancy, childbirth, and the use of estrogen, including hormonal birth control. 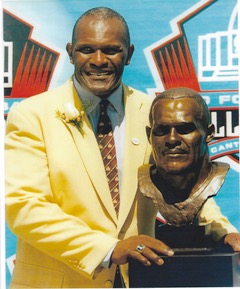 For anyone recovering from a blood clot and facing any type of struggle, whether it’s physical or emotional, Carson stresses the importance of staying fit and maintaining a positive attitude.

“It’s important to keep moving and stay positive, no matter what shape you’re in or what your abilities might be,” he says. “Maybe all you can do is take a short walk, or a few spins on a stationary bike, but if you are able to commit to working on your fitness you will get stronger and your mental strength will improve too. It’s very important to stay healthy, maintain good nutrition, and always listen to your body.

“Most of all, no matter whether your recovery seems easy or difficult to manage, always live life as well as you can. Always live your best life,” he stresses.