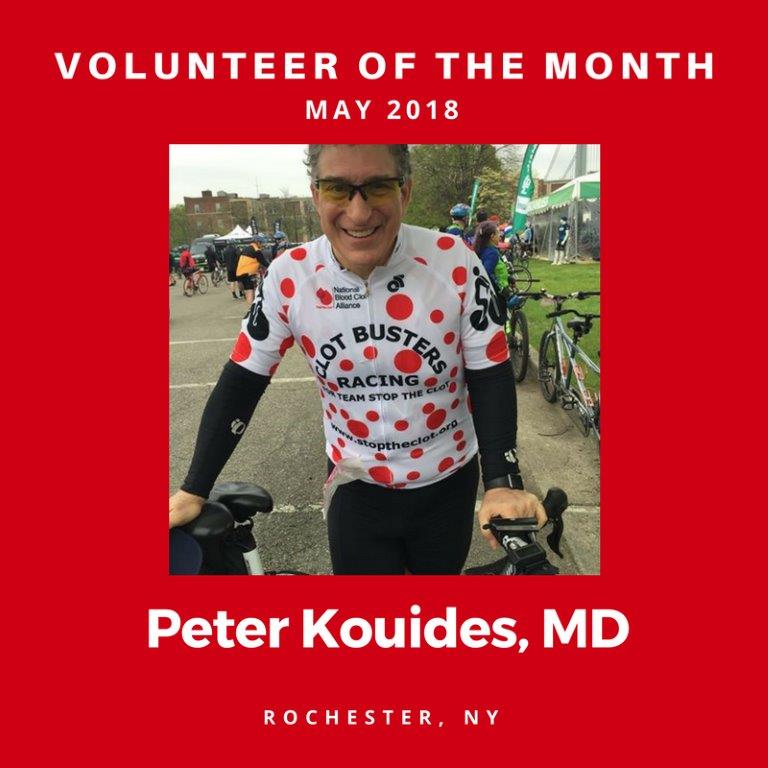 Dr. Peter Kouides is a highly regarded hematologist at Rochester General Hospital and the medical director of the Mary M. Gooley Hemophiia Treatment Center, where he has served since 1998. He is also the current President of the Thrombosis & Hemostasis Societies of North America (THSNA), and serves on NBCA’s Medical and Scientific Advisory Board. A noted researcher, he recently co-edited a textbook of bleeding disorders in women. He is also involved with the Centers for Disease Control and Prevention, the International Society of Thrombosis and Hemostasis, and the National Hemophilia Foundation. In 2010, Dr. Kouides was the recipient of the Rochester General Hospital Father Norton Physician of the Year award.

Dr. Kouides is also an avid cyclist. From March through October, he cycles the long way to work, totaling 20 miles in the morning, and 7 miles home in the evening. Typically, his weekends include another 50-75 miles of riding. He has also completed several Century rides.

At the end of January, Dr. Kouides submitted his application to NBCA for the TD Five Boro Bike Tour. At that time, he stated that his fundraising goal was $5,000 to be raised by the day of the event. His “dream goal” however, was $10,000. By race day, he had exceeded his $5,000 goal by a couple of thousands of dollars. Now, he is only $1,664 away from his “dream goal.” For anyone wishing to help him reach this goal, please click here.

Thank you for Dr. Kouides for all that you have done to help countless patients in your 25-year career. We’re proud to honor you as our May 2018 Volunteer of the Month.